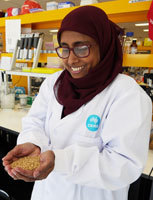 A new type of wheat that has ten times the amount of the fiber which helps improve gut health and also fights bowel cancer and Type 2 diabetes than normal wheat has been developed by an international research team, including the Commonwealth Scientific and Industrial Research Organization (CSIRO), which is the federal government agency for scientific research in Australia.

The new wheat could provide millions of people with a lot more fiber without having to change their eating habits.

In the United States, a small number of farmers in Idaho, Oregon, and Washington harvested in 2017 the first U.S. crop of the wheat, which is high in amylose.

The wheat will be processed into flour and incorporated into a range of food products that Americans can expect to see appearing on their supermarket shelves in coming years.

Dr. Ahmed Regina (pictured above), a principal research scientist at CSIRO, said products made from high-amylose wheat contained more than ten times the resistant starch, a type of dietary fiber, than those made from regular wheat.

"Wheat is the most popular source of dietary fiber and eaten by 30 % of the world’s population, whether it's in bread, pizzas, pastas or tortillas.

"Having a wheat with high levels of resistant starch enables people to get this important fiber without changing the type of grain they eat or the amount of grain-based foods they need for recommended dietary levels."

The team responsible for developing the new type of wheat are hopeful an Australian-based company will capitalize on the opportunity to market it locally.

The wheat is a result of a collaboration which started in 2006 between CSIRO, and French company Limagrain Céréales Ingrédients, and the Australian-based Grains Research and Development Corporation on developing wheat varieties with a higher content of resistant starch.

Together they spun out a company called Arista Cereal Technologies.

A breakthrough came when they identified two particular enzymes, that when reduced in wheat, increased the amylose content.

"From there, we used a conventional breeding approach, not GM techniques, and managed to increase the amylose content of wheat grain from around 20% or 30 % to an unprecedented 85%," Dr Ahmed Regina said.

"This was sufficient to increase the level of resistant starch to more than 20 % of total starch in the grain compared to less than 1 % in regular wheat."

US-based, Bay State Milling Company was the first company to take this technology to the market through a licensing arrangement with Arista.

This year they contracted farmers to grow about 400 hectares of the wheat, which will be marketed as HealthSense high fiber wheat flour.

"We are very excited to launch HealthSense in the U.S. and change the way Americans think about wheat," Bay State Milling CEO Peter Levangie said.

"HealthSense will deliver flour functionality to our customers and fiber benefits to consumers, enabling better human health through the foods they love to eat."

In Australia, Arista is partnering with a breeding company to develop high-amylose wheat varieties suitable for different regions.

They are working on producing enough grain for product testing and seeds for initial commercialization.

Lindsay Adler from CSIRO and an Arista Director, said the company was keen to find an Australian licensee who would develop a new product for local and possibly also Asian markets.

"This is an opportunity ripe for the picking, with customers across the world increasingly demanding foods with improved health benefits," Mr Adler said.

CSIRO has developed other novel grains that commercial partners have taken to market, including the ultra-low gluten barley, Kebari and BARLEYmax, a barley with high levels of resistant starch.