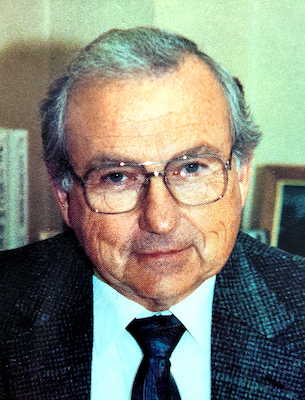 Urbandale, IA (October 1, 2020) - Kenneth Eugene Bratney, 94, of Urbandale passed away Sunday, September 27, 2020 after illness due to Covid-19. His wife of 67 years, Ann, predeceased him in 2015. Ken was born on May 21, 1926 in Portland, Oregon. His parents were Erlem James Bratney who was born in Hastings, Nebraska and Bertha Mae Pierce Bratney of Horton, Kansas.

Ken grew up in Portland as the third and youngest child in a strong Christian family setting. One of his earliest memories was the enjoyment of helping his dad tend their large 1,100-tree filbert orchard, the source of the hazelnuts we all enjoy. They pruned and cared for these trees from 1935 to 1941. Ken remembered with pride that he was able to drive back and forth to the orchard with his father sitting by his side. Starting as a young 10-year old, he enjoyed working for many years on a family friend's dairy farm across the Columbia River in Trout Creek, Washington. He often received a bounty for every mole and groundhog he caught. He learned to ride horses and to do the chores he was assigned. Mount Adams, one of the Cascade Range mountains, was not far away; one of his best memories was climbing this 12,280-foot peak one summer.

Ken graduated from Portland's Washington High School during the latter part of WWII. He joined the Navy, and following his recruit training, he was commissioned as a Lieutenant JG and sent to Carroll College in Helena, Montana where he became friends with Bruce Warden from Ballantine, Montana, also a young naval officer. Bruce introduced him to his younger sister, Ann, who was attending Iowa State University. When his work at Carroll was completed, Ken was accepted into the Engineering College at the University of Iowa, where he graduated in 1948 with a degree in Civil Engineering. Ken and Ann were married in Ballantine in July of that year and honeymooned in Red Lodge, Montana, on their way to start a home in Portland. Ann was forever the love of Ken's life.

Five children were born in quick succession between 1950 and 1954. Due to Ken's career decisions, the family moved to Danville, Illinois in 1961, then two years later to Des Moines, Iowa. The family lived in their home on Sherry Lane from 1963 to 1992. After all the children had moved on, Ken and Ann built a beautiful home in the Napa Valley neighborhood of Waukee, Iowa. In 2005 they moved to the Deerfield Retirement Community. He and Ann also enjoyed many winters on the beautiful Big Island of Hawaii in Kailua-Kona. They had many close friends with whom they celebrated their 50th wedding anniversary in 1998 and Ann's 90th birthday in 2015.

Ken's passion and pride were evident for the company he started and all the good people who worked by his side over the years. Early in his career, Ken worked for an engineering consulting firm in Portland, but shortly thereafter went to work as a sales engineer for the Reid-Strutt Company, an agricultural equipment supply and design firm based in Portland. He travelled throughout the Pacific Northwest calling on seed, feed, milling, and grain customers. After the move from Portland to Danville in 1961, Ken worked with the D.W. Tyler Company. In 1964 Ken decided to use his sales and engineering skills to create a business of his own. He lined up a few regional sales agreements with some prominent seed and grain equipment manufacturers and moved to Des Moines to start the Ken Bratney Company. The business started in his basement with Ann acting as his secretary. His unique sales and technical abilities led to opportunities to provide complete seed handling systems for his customers. Business was good, so he hired employees and the company grew. During the seed corn and soybean facilities construction boom of the late 1960s and 1970, he merged with other compatible companies to expand the business' capabilities, including construction services.

The business continued to prosper, encompassing the needs of most agricultural crops throughout the United States, Europe, and South America, simultaneously maintaining a reputation for excellence and dependability. Today, Bratney Companies is a well-known premier provider of innovative equipment and project solutions for agricultural facilities. The business has offices, branch offices, and/or warehouse operations in Iowa, Missouri, Idaho, North Dakota, California, and Argentina.

Ken is survived by five grown children, Lynn, Paul (Anna), Bill (Joni), Barbara Flaherty, and Bruce (Sylvia), ten grandchildren, and 14 great grandchildren. In addition to his wife Ann, he is preceded in death by his granddaughter, Laura Marie Flaherty and his two sisters, Jeanette Nell Condit and Helen Louise Atterbury.

To minimize Covid-19 exposure, Ken's funeral service will be private for the immediate family only at Westkirk Presbyterian Church in Urbandale on October 8 at 10AM. However, the service will be live streamed. A link will appear around 9:45AM, prior to the service, on Ken's obituary page at www.IlesCares.com, where you may also leave online condolences. Private Burial will be at the Booneville Cemetery in Dallas County immediately following the funeral.

In lieu of flowers, the family asks that memorial contributions in Ken's name be directed to Hope Ministries of Des Moines, PO Box 862, Des Moines, Iowa 50304.