Why I Believe In IAOM ... Jim Doyle, King Milling Co. 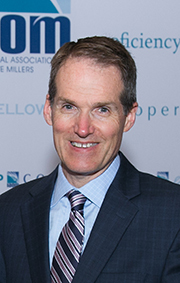 “I graduated from Michigan State University in 1981 and started a full-time position at King Milling Co. in January 1982.

I joined IAOM at that time and have been attending meetings and conferences ever since.

“My first involvement was at the district level, where I went through the officer positions eventually becoming chair of the Wolverine district in 1996.

In those days, our district met twice a year, which afforded me great opportunities to get to know the other Michigan millers.

I became more active with IAOM when I was invited to be on the Technical Committee in 1996 and have been chairman since 2012.

I have been attending the IAOM annual conference and expo for the last 37 years, missing only four times.

“IAOM has a lot to offer members and their companies.

Certainly, the educational presentations given at district meetings and annual conferences keep members up to date with the latest milling technologies, industry trends, and safety information.

The expo, where millers can visit with vendors to discuss problems or successes, is very valuable.

There just aren’t any better people than in the milling industry, and IAOM provides new and longtime members a great opportunity to network, make new friends, and reacquaint with old friends.

“I recommend IAOM membership to anyone in the milling industry. I would further recommend that he or she become as involved as possible.

The more involved I became, the more I and my company benefited.”