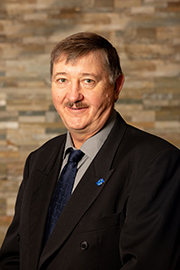 “My agriculture background led me into the milling industry in 1979 as a wheat flour miller at BP Kent Flour Mills under the teaching of Bill Kent, past president of IAOM.

Bill passed on his passion for milling and IAOM to all his millers and encouraged them to become members.

“In 1986, I completed the IAOM Correspondence Course, as well as the Canadian Millers Course from the Canadian Grains Institute in Winnipeg, MB.

I continued to learn more about IAOM working under Don Taman, past IAOM president, from 1985 to 1990 at Robin Hood Multifoods in Saskatoon, SK, Canada.

“In 1995, I first became involved with the IAOM Western Canadian district and chaired the district conference in 1997. I have been involved several more times over the years.

Since 2015, I have served on the IAOM board of directors as a representative for the Western Canadian district.

In 2019, I supported my head miller, Shayne Salmond, who chaired the Western Canadian district’s annual conference.

“The highest value I hold for IAOM is that it provides a great platform for millers to learn and improve their education in milling.

These learning opportunities are further enhanced by conferences and the ability to meet with other millers.

Networking with our valued partners of IAOM, the allied trades, provides millers with exposure and equipment knowledge they can benefit from while attending these conferences which, in turn, can improve their mill’s performance.

“There are so many experienced IAOM millers, leaders, and educators who want to share their knowledge and experiences to help others.

All of this is not possible without IAOM’s drive to be the premium resource for all millers.

I encourage everyone in the milling industry to learn everything they can from IAOM, as members are always willing to share with everyone.”