Why I Believe In IAOM ... Red Tegeler, Siemer Milling Co. 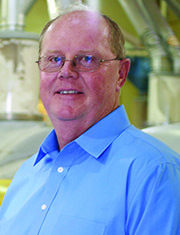 “I started milling in February 1972 as a miller when Harold Kramer encouraged me to come work at Siemer Milling.

In 1978, I had my first opportunity to go to an IAOM short course and joined IAOM at that time.

That was my first exposure to milling outside of Siemer Milling Co.

“The first IAOM meeting I attended was in Springfield, IL.

My first impression was that these were some good people to be around, and I had a great opportunity to learn from them. I served as a district officer from 1983 to 1986.

We were in the Corn Belt District at that time.

Our centennial anniversary was during my tenure as IAOM president. I have sat on the Technical Committee since 1995.

“I was the Milling & Baking News Milling Operative (Miller) of the Year in 1994 and a Gold Medal Award winner in 2007.

“I’ve been reading comments from IAOM members in past issues of Milling Journal, and I can only repeat a lot of what’s already been said. The relationships you develop and the people you interact with are so meaningful.

“Another asset is the organization’s educational and training programs.

There are multiple programs running currently and still new ones being developed.

They cover everything on the technical side of flour milling, as well as topics on the laboratory side of things.

“I have spoken to people in other organizations, and they’re a little bit envious of how we can interact with each other and the friendships and camaraderie we have in our organization.”