Why I Believe In IAOM ... Stephen Banks, Grain Craft 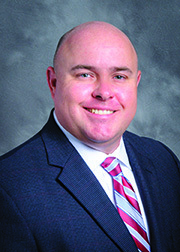 “I believe I became a member of IAOM back in 2008. I joined when I was part of the Milner Milling Company. To me, the networking, learning from vendors and other flour millers, and sharing ideas are really the primary benefits of membership.

“Since becoming a member, I’ve served on several committees. I’m currently director for the Southeastern district and have been on its committee for several years. I’ve been pretty involved in the association and district over the years.

“Probably the best thing about being a part of IAOM is the way everything comes together with the vendors and the meetings, because you get to hear new ideas in the milling industry and see the new equipment that’s available.

“Again, it’s the whole networking aspect of it – that’s what’s really key about it. I enjoy sharing ideas and thoughts on what’s going on at our mill and hearing about what my peers are doing in their mills. So there are a lot of good things that come out of it – everything from the food safety side to the safety of employees.

“IAOM has a lot to offer its members, and I would recommend joining it in a heartbeat.”