Why I Believe In IAOM ... David Byers, Ardent Mills 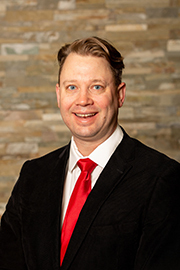 “I was fortunate that my first IAOM district meeting was when I attended KSU as a college kid going through my second year of milling science.

I was excited about the industry before the show, but since then, the science and the art of milling have been a part of me. Just the other day, my wife, Andi, and I were at a friend’s house and work came up.

Our friends were amazed at my passion as I talked about my work.

Andi said, ‘Milling is in his DNA.’ A huge part of that is because of IAOM.

My first position was in the Ohio Valley district in 2004 as a committee chairperson.

My family and I moved overseas for the next four years; on my return, I became a committee chairperson in 2008-09.

“I believe that IAOM has created a culture of camaraderie with vendors and all members.

Throughout the years that I’ve attended IAOM meetings, I’ve developed incredible relationships, and through those relationships, I’ve learned about the industry and its equipment.

It has made me a better, more educated miller.

I’ve also brought those teachings back to the mills I’ve worked in, bringing improvements to help those plants and team members.

“The educational programs for new millers include sessions on all aspects of business, including food safety, technical milling, baking, and maintenance.

IAOM has something that can help make you and your team better.

When a new team member joins us, I always encourage them to became a part of IAOM, because it has been, and continues to be, an incredible experience.”