Why I Believe in IAOM ... Roy Loepp, Seaboard Corp. 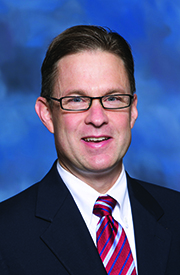 “I’ve been a member of IAOM since 1990 when I first started full-time work in the industry.

I was asked to join the Education Committee in 2000 and have served on it continuously since then.

I had the distinct privilege to give back to the organization by serving on the executive officer team for four years, including serving as president for the 2015-2016 term.

“I initially joined the association because my colleagues and superiors were members.

It was something that, as a young miller, I wanted to be a part of.

I felt it a big privilege to be in the same room as the giants of the industry, both from my company and from others. My hope was to be like them some day, and by attending educational meetings, meeting people, and learning what was new in the industry, I knew that I had a better opportunity to develop in my profession.

“Perhaps the greatest benefit of membership is the ability to attend trade shows and to discuss with industry colleagues common technical and managerial challenges.

Since others often experience the same problems and have solved them in many cases, it is easier to improve one’s own mill(s) more quickly than would otherwise be possible.

“Being a part of IAOM, and taking advantage of the opportunities it offers, is an important part of attaining one’s aspirations in this industry.”