Why I Believe In IAOM ... Kelly O'Brien, Rogers Foods, Ltd. 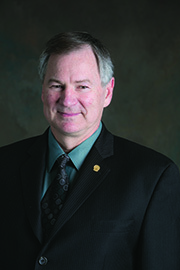 We would attend the local district meetings, and my first annual conference was in San Antonio, TX in 1986.

The annual conferences have been great learning experiences.

After all these years, I still always get a lot out of them. Every year you learn something new.

“As far as participation, I’ve been a member of district committees and a district chairman numerous times.

I’ve served on the board of directors for two terms.

Sitting on the board helped me a lot, because I got to know people better and made more personal connections.

I haven’t been as involved recently, as I’m nearing the end of my career and am encouraging the younger guys to get in there and get involved.

“To me, the educational component of membership is a big benefit.

When I first started, we were a small company in British Columbia, and there were no other mills around, nobody to talk to and learn from.

Going to the meetings and events helped me get to know other people in the industry and do some networking, which was really valuable.

I was then able to phone people and asks questions and exchange ideas.

“Being a part of IAOM has helped me a lot through the years, so I recommend membership to every miller at Rogers Foods.

I try to send as many people as possible to the meetings – first to the district meetings to meet a few people where it’s smaller and more intimate.

You meet a few people, and then when you go to the annual conference, you know a few people who you can seek out and continue to grow your network of connections.”