Why I Believe In IAOM ... Bart Hahlweg, Bay State Milling 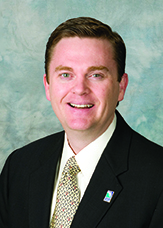 “When I joined IAOM, I was a new plant manager in Blackwell, OK.

I had first heard about the association from Brad Hover and Dennis Bunck, co-workers who encouraged me to get involved to stay informed about what was going on in the milling industry.

“Since joining IAOM, I’ve been actively involved in various service capacities, including director-Golden West district from 2005-08, and IAOM president from 2010-11.

“The education and networking opportunities with IAOM members and the Allied Trades group were what drew me into the association.

IAOM consists of individual members who have the common goal of promoting the milling industry. I believe this to be a noble cause, and this is what motivates me to continue supporting IAOM.

“The leadership development and educational experiences I had were great, but what I really like best are the professional relationships with the people in the association.

For those in the milling industry, I can’t think of a better organization.”