Why I Believe In IAOM ... Damon Sidles, Miller Milling Co. 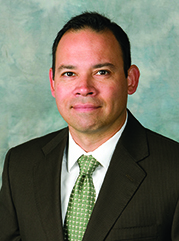 “I first became involved with IAOM in the late ‘90s by attending my very first district meeting, but I actually had been a member since 1994.

I heard about the organization while attending Kansas State University as a milling student.

Our class happened to visit Kansas City, MO in 1991, which was hosting the IAOM Annual Conference & Expo that year.

Attending that conference sparked my interest in learning more about the association and how I could contribute as a member.

“I have been fortunate enough to serve in many capacities within the association.

I served on the Technical Committee from 2000-2017 and now serve currently on the Education Committee.

“Some of the benefits of membership are up-to-date education and technology information through vendors and its members, as well as trends in the industry.

“I enjoy the fellowship and getting together with the members every year.

I have made contacts in the early part of my career who became personal, dear friends of mine.

I highly recommend joining the association and getting involved in some aspect.

Our membership is based on volunteering which contributes to the overall success of IAOM.”