Insights from nearly half a century in flour milling. 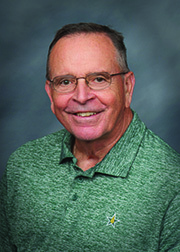 This article is taken from the First Quarter 2021 MILLING JOURNAL

Gary Pickelmann, who retired in 2020, is a milling industry veteran with more than 47 years of experience at Star of the West Milling Co., Frankenmuth, MI. In 1972, he earned a bachelor’s degree

in agricultural engineering from Michigan State University, East Lansing, and spent one year as a maintenance engineer for Oscar Mayer in Madison, WI. He began his career with Star of the West in 1973, where he started out as a milling trainee and was promoted to shift miller after six months.

During 1976 and 1977, he completed the milling correspondence course and milling short course offered by what was then the Association of Operative Millers (AOM), which became IAOM in 2003.

In 1997, he received the Milling Operative of the Year award. In 2009, he was given the Gold Medal award, which is IAOM’s highest honor in recognition of service to the industry.

Star of the West History

“Star of the West Milling Co. was founded in 1870 and began as a small water-powered mill down by the Cass River in Frankenmuth. The first mill burned down, and the location has moved twice. The structure that exists today was built in 1910 and has been remodeled many times. Our latest project is to replace all the rollstands with new ones and put in new sifters.

“I’ve made a lot of good friends in the industry, not only millers, but from the allied trades, as well. It’s really satisfying to see those friends when you go to the IAOM’s annual conference.

“I’ve met so many people who I can call on for help with my mill. Despite the fact that these people are competitors, IAOM members are really willing to share. It’s just a very friendly organization.

“Over the years, I’ve held a number of roles with IAOM:

• For approximately 30 years, I served on IAOM’s Technical Committee and was its chairman from the mid-1990s to mid-2000s.”

This article is excerpted from an interview with Gary Pickelmann, who retired in 2020 as corporate milling superintendent, Star of the West Milling Co., Frankenmuth, MI, from an episode of the IAOM First Break podcast. To listen to the podcast, go to iaom.

“One of the most important aspects of a flour mill is the cleaning house. It’s vital to get a good product at first break. If you do, ‘you can make a silk purse out of a sow’s ear,’ as our former president and chairman Dick Krafft used to say.

“In the mill itself, the two key areas I see are the grinding on your rollstands and sifters. Those are the two workhorses, so if they aren’t working properly, you aren’t going to get a good product.

“It’s very helpful to pass on this information to the young millers, because milling is not an overnight learning experience. The job is a lifetime of learning.”