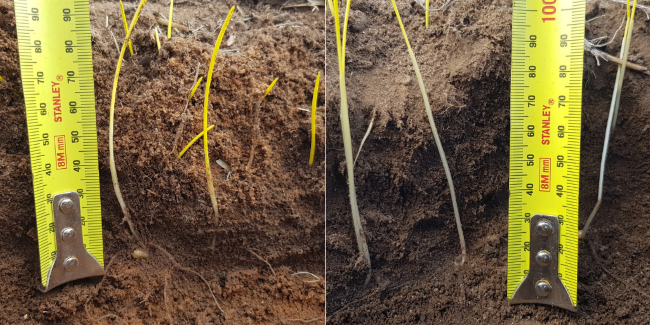 Both Mace (PBR), left, and ‘Mace18’ wheat (containing the Rht18 gene associated with the long coleoptile trait) sown on May 25 at a depth of 120 millimetres, plus dry soil furrow fill. (Photo: SLR)

(April 20, 2021) - The development of ‘long coleoptile’ genetics that allows wheat to access moisture deep in the soil has attracted strong interest from growers looking to maximize yields in a warming and drying climate.

The coleoptile is the protective sheath enclosing the emerging shoot and first leaves, and the longer it is, the greater the emergence potential from deeper in the soil, as discussed in a recent Grains Research and Development Corporation (GRDC) video featuring CSIRO chief research scientist Greg Rebetzke.

Wheat lines containing the longer coleoptile trait have not yet been commercially released but are being progressed by breeding companies after the identification and development of genetics, particularly by CSIRO.

To ensure wheat growers can take advantage of these new lines when they become available, the GRDC is investing in two years of on-farm trials that will deliver agronomic and farming systems guidelines.

The small plot trials are being conducted on a range of soil types in Western Australia’s low to medium rainfall zones and are being led by Michael Lamond and Craig Brown, of SLR, which is part of the Synergy Group.

Josh Johnson, GRDC manager agronomy, soils and farming systems – west, says the new trials will focus on the relationship between the long coleoptile trait and agronomic factors including time to emergence, soil temperature and planting depth, as well as the combined effect of these traits on crop establishment.

He said accessing deeper stored soil moisture (to a depth greater than 10 centimeters) to enable earlier seeding could be a major advantage for many growers.

“Production advantages from earlier and deeper sowing are driving the development of new technologies, such as the long coleoptile trait, that enable crops to be sown deep within the soil profile,” Johnson said. “The development of these technologies is also being driven by increasing farm sizes, higher temperatures at the end of the growing season and the need for growers to complete seeding within the optimum sowing window.”

Johnson says the GRDC continues to work with research partners on a range of investments to develop tools and technologies that offer growers choices and information about ‘when, how and what to sow’ to maximize their overall profitability.

For more information, watch "Breeding wheat for a changing climate."