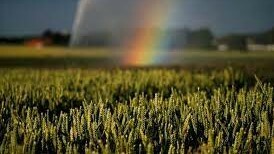 Reuters reports that forecasters have since late May increased estimates for soft wheat output in the European Union and Britain, with grain trade association Coceral now seeing the combined EU and British crop up nearly 14% from 2020.

“Crops are a bit behind, but conditions are fine," Benjamin Bodart, an analyst with Agritel, said.

"We can’t talk about a disastrous crop any more, we’re back to an average-plus crop.

“The issue could be more about the quality than the quantity of the European crop,” he added, noting heavy rain in Romania has raised the risk of milling quality suffering.

In France, more warm temperatures expected next week after storm showers since mid-week should continue to boost plants.

“I am very positive about wheat crops,” a French trader said.

“Bit by bit we should see the harvest figure increasing.

"We’re heading for good yields in both shallow and deep soils.”

Agritel sees the French crop at 38 million tonnes or above in light of the warm June weather, Bodart said, a level also cited by some traders.

Some 80% of French soft wheat is in good or excellent condition, according to farm office FranceAgriMer.

Crop development is a week behind average, the office estimates, but traders expect that gap to narrow.

In Germany, warm weather has also been beneficial and should limit any harvest delays.

“We are on course for a larger crop,” a German grains analyst said.

“We could see Germany’s harvest starting in the usual time frame around early August in the main regions producing for export if we have normal weather patterns into the summer.”

However, there was caution after late damage in recent seasons due to summer drought and heatwaves, the analyst added.

Germany’s farm cooperatives association in mid-May forecast the 2021 wheat crop of all types will increase by 2.4% on the year to 22.66 million tonnes.

In Poland, production could edge up to 12.2 million tonnes from 12.0 million last year, estimates Wojtek Sabaranski of analysts Sparks Polska.

“It is likely that we will harvest a bumper wheat crop this year, as the condition of wheat in the country is really good,” Sabaranski said, adding warm weather should reduce a 7-10 day lag in plant growth.

In Britain, the improved weather has increased chances of a reasonable harvest following a rebound in sowing.

“While record yields are unlikely as many fields remain patchy, average to marginally above average yields are a good working assumption for now, with a UK wheat crop pushing up toward 15 million tonnes,” said CRM Agri analyst Peter Collier.

The planted area is expected to be about 30% up from last season to return to a more average level, he said.

Britain harvested just 9.66 million tonnes of wheat in 2020, the smallest crop in more than three decades.