Scattered rains fell across the state Sunday night ahead of a cool front.

The combination of light rain and lower temperatures halted harvest progress across central and southern Kansas, but farmers and elevators expect combines to be rolling again today (June 22).

In the weekly Crop Progress and Condition report, USDA National Agricultural Statistics Service noted 13% of the Kansas wheat crop has been harvested, behind last year’s 23% and the five-year average.

Sixty percent of the wheat crop was mature as of June 20, near last year at this time.

Statewide, the agency rated the wheat crop’s condition at 63% good to excellent, 25% fair, and 14% poor to very poor.

Martin Kerschen, who farms near Garden Plain in Sedgwick County, received a half-inch of rain overnight but expected to be back in the combine by Monday evening.

He started cutting a week ago and estimates the area is roughly two-thirds of the way through wheat harvest.

His yields are good — ranging from 60 to 76 bushels per acre, but not exceptional like last year.

Test weights are also good at 63 to 65 pounds per bushel, particularly where fungicide was applied.

Protein levels are below average.

“This harvest is good for us,” he said.

“If we could get this yield and profitability consistently, we’d be happy. But we’ll always strive for a little more.”

Kerschen did report having disease pressure from wheat streak mosaic virus, which is uncommon in his part of south-central Kansas.

He looks forward to seeing which K-State wheat varieties come down the breeding pipeline for his area with resistance to the virus.

Farmers in Ness County were also stalled for the moment, despite receiving only sprinkles Sunday night, according to Michael Kempke, CEO/general manager of The Cooperative Grain and Supply Company in Bazine.

Farmers were delivering wheat cut only the night before as of midday Monday, but he expected harvest to be back up to speed by today.

Overall, Kempke reported wheat harvest in the area is roughly 11% complete with 109,000 bushels delivered since the elevator took in the first load on June 17.

“We haven’t even gotten in the good stuff yet,” Kempke said.

“I would expect to see some 80-,90-,100-bushel wheat around here, especially where they treated for stripe rust early.”

Stripe rust was a concern for the area, so many farmers put a preventative down while topdressing in late winter that held through May.

If not treated early, most farmers did put on a May application.

As a result, some fields have been impacted, but many have remained in good condition.

As of June 20, Kempke said the elevator average for test weight was 62.1 pounds per bushel and moisture was averaging 10.1%.

He keeps a close eye on protein as every load coming into the elevator is tested for protein, and farmers are paid premiums for superior protein content.

Overall, Kempke is budgeting for one of the biggest crops in recent years, maybe even better than the 2019 harvest.

“From a farmer’s perspective, I think they’re pretty excited given the high yields and good prices — which is great for the farm economy and the community, having those extra dollars around this summer,” he said.

“They’re about as happy as I’ve seen them in a while.” 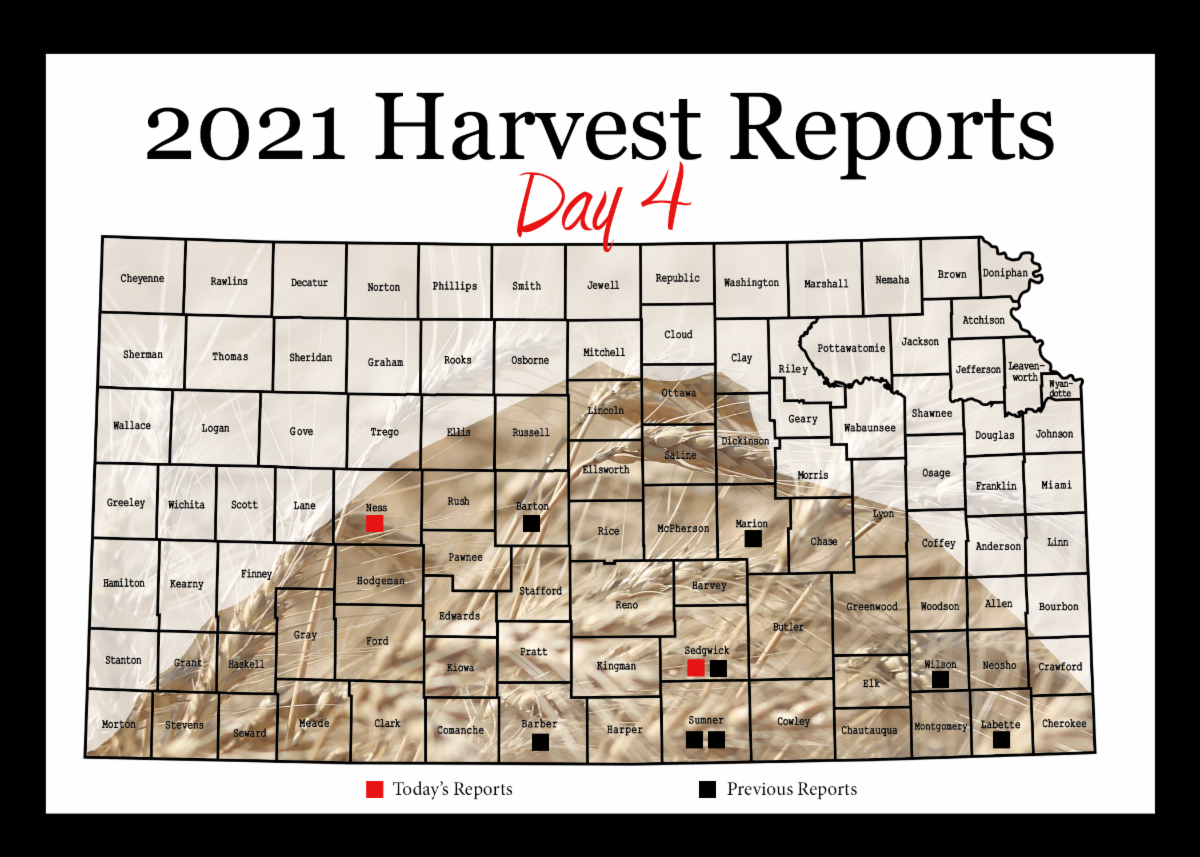