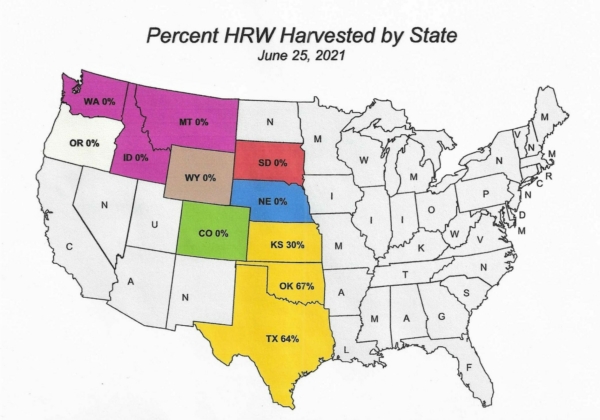 With very favorable harvest weather dominating (high temperatures and lower humidity) over the past week, the 2021 HRW wheat harvest continues to pick up speed.

As a result, harvest is now 2/3rds complete in Oklahoma and nearing that point in Texas, according to the June 25 Plains Grains, Inc. HRW Harvest Report.

While Texas has been slowed by wet conditions and muddy fields, the pace has picked up significantly over the last week.

Some slightly lower test weights have been reported in central Texas where very wet conditions prevailed after the crop matured, which continues to negatively affect yield as well.

The Texas HRW wheat crop is now 64% harvested, those acres are predominately in southern and central part of the state now moving into the northwest region.

Harvested acres remain slightly behind the 5-year average of 68%.

Scattered showers and thunderstorms are moving across northwest Texas and northwest Oklahoma at this writing.

Oklahoma, (now 66% harvested) and is equal to the 5-year average of 66% harvested by this date and continues in northern/northwestern parts of the state, along the Oklahoma/Kansas border and the Panhandle region.

Oklahoma continues to report very good yields and test weights with wide ranges of protein, but generally 10.5% to 11.5% and an overall “estimated” average of 11.1%.

As reported last week, yield, test weight, and protein are much like those being reported in Oklahoma.

Scattered showers and thunderstorms are moving across the northwest central Kansas at this writing.

Wheat Proves Resilient and Profitable For Texas Farmers in 2021, Despite Obstacles