Widespread rainfall across Kansas on Friday and into Saturday (June 25-26) has halted wheat harvest progress for most of the state.

With cooler temperatures following the storms, farmers expect to be out of the field until early this week.

Aside from the rain, timely fungicide application is playing out as one of the most important management decisions this growing season with reporting farmers noting substantial yield and quality differences between treated and untreated fields.

Eldon Lawless, who farms in Belle Plaine, wrapped up wheat harvest in Sumner County on Wednesday (June 23) before the heavy rains moved into the area.

He noted the cool, humid May weather was “a good way to make wheat, but also fungus,” meaning applying fungicide paid off this year.

John Hildebrand, who farms in Stafford County, also applied fungicide for stripe rust, which had a heavy presence in the area and smoked untreated fields.

He hopped around wheat patches on Friday afternoon (June 25) following a trickle of rain Thursday night, but then was eventually rained out.

He received about two inches of rain total and is hoping to be back in the field on Tuesday (June 29).

Overall, Hildebrand reported this year’s wheat crop has been more consistent across his fields than in years prior in addition to turning better than expected and better than last year.

Yields are averaging between 50 and 62 bushels per acre — maybe even higher than once tickets from Friday are verified — with test weights from 60 to 64 pounds per bushel.

Down the road, Stafford County Flour Mills, home of Hudson Cream Flour, reported protein levels coming in are averaging around 11%.

Fungicide application also made a significant difference in yield and quality for Justin Knopf, who farms in Saline County.

He applied fungicide to all his fields, and reports from non-treated fields are significantly lower.

He noted fields cut thus far have yielded in the 50s and 60s, with one field of WestBred GrainField yielding in the 70 bushel per acre range.

At this point, the wheat harvest has been about what he expected — and comparable to last year — with proteins averaging between 10% and 11.5% and test weights ranging from 59 to 61 pounds per bushel.

Knopf’s first full day of cutting was last Tuesday (June 22), but said the straw is pretty tough due to high humidity and a little bit of moisture.

Before the rains late last week, he estimated another week of wheat harvest before he will finish. 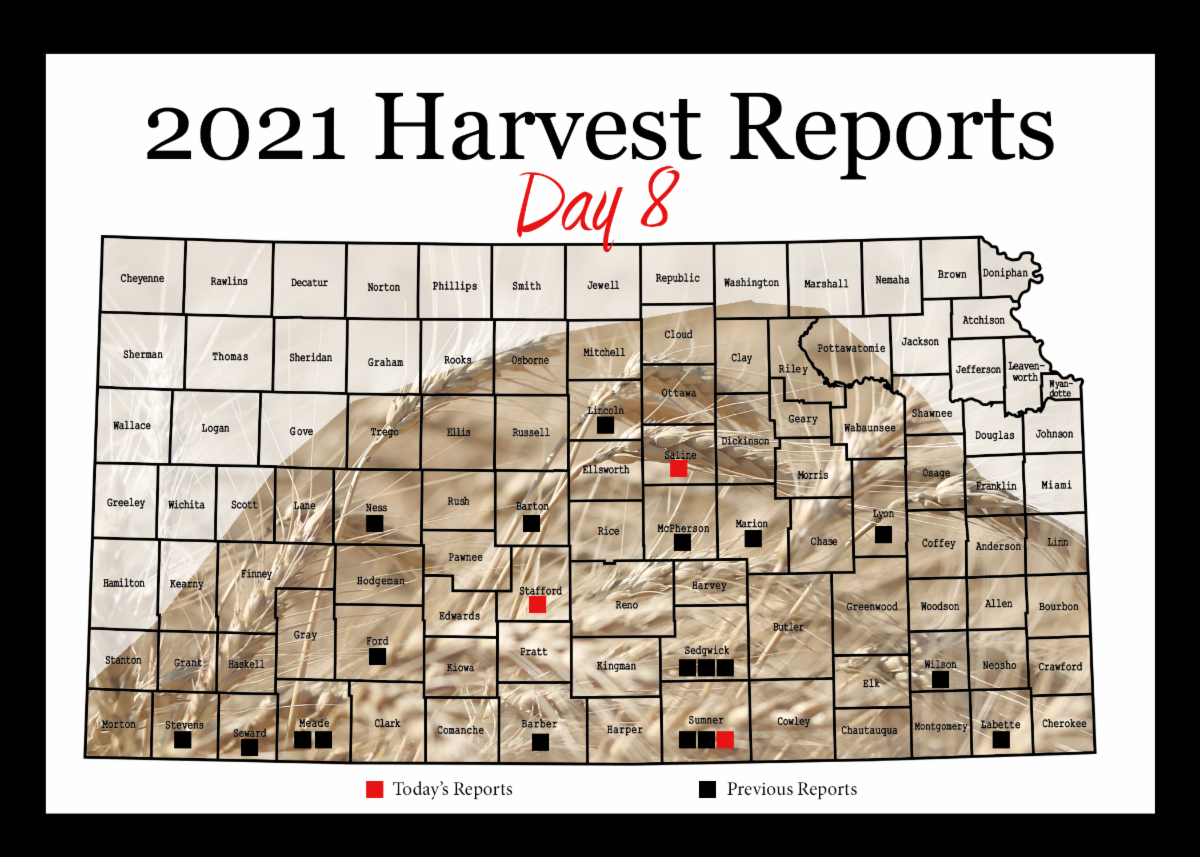