Rain has continued to delay harvest for farmers in central and eastern Kansas who needed moisture for pastures and fall crops.

In the western third of the state; however, wheat harvest is picking up pace quickly with better-than-expected yields and quality.

We also received reports of farmers in northeast Kansas who were able to get into the fields on Monday (June 28).

Mike Jordan, who farms near Beloit in Mitchell County, didn’t even make it to the end of the driveway Monday afternoon without sprinkles on the windshield.

Needless to say, his wheat harvest progress is behind due to rain, having only two half-days of harvest since starting on June 23.

Despite the delays, Jordan welcomed the moisture.

“We had more than two inches of rain in two days, and the only place it ran off was the roof,” Jordan said.

“It was badly needed; I love complaining about the rain, we don’t get to do it very often.”

The fields he has cut thus far are seeing incredibly good yields.

His wheat crop was planted behind soybeans and did not come up until after rain in November, so he was expecting yields in the 30s in May, but is seeing a range from 58 to 62 bushels per acre.

After the rain delay, however, the green stems in the field when harvest started are now mature and ready to cut — as soon as weather permits.

In the weekly Crop Progress and Condition report, USDA National Agricultural Statistics Service noted 41% of the Kansas wheat crop has been harvested, near 44% the year prior, and behind 48% for the five-year average.

Eighty-three percent of the wheat crop was mature as of June 28, near 87% last year at this time.

Statewide, the agency rated the wheat crop’s condition at 62% good to excellent, 25% fair and 13% poor to very poor.

Brinlee McNary, grain merchandiser with Scott Cooperative in Scott City, reported the coop has taken in more than a million bushels so far, with the first big day of harvest on Sunday (June 27) and quite a few loads coming in Monday morning.

Yields are ranging from 60 to 80 bushels per acre, higher than last year and closer to average.

Protein is ranging from less than 10% to 13.5%, with pockets of high protein around Scott City and Marienthal.

Test weights have all been good, above 60 pounds per bushel, and moisture is averaging around 12.5%.

Dockage has been a slight issue in the southern part of Scott County.

She expected harvest to continue for another 10 days.

Shayne Suppes, who farms in Finney, Lane and Scott counties, is pleasantly surprised with this year’s wheat harvest.

Suppes and his family have grown 100% hard white winter (HW) wheat for 12 years.

His harvest started about five days ago, with slow starts each day due to high humidity, but is about one-third complete.

Before much-needed rains in late spring, the wheat crop was looking grim.

Now, at harvest, yields are ranging from the mid-30s all the way up to the low-to-mid 80s, with a lot of wheat yielding in the mid-60s in between.

Suppes reported protein levels are “all over the place” from 10% to 15%.

Test weights have also varied from lower than 60 up to 63 pounds per bushel.

His best field thus far — planted to Joe, a HW variety developed by Kansas State University and marketed by the Kansas Wheat Alliance — yielded 80 bushels per acre with test weight of 63 pounds per bushel and protein at 11% to 12%.

Even better, thanks to the disease resistance bred into the variety, he did not have to apply fungicide to this field.

He said a neighboring field of KS Silverado — also a Kansas Wheat Alliance variety — is one to watch with similar results.

“It’s still fun after all these years,” Suppes said.

“Nothing compares to the Kansas wheat harvest.” 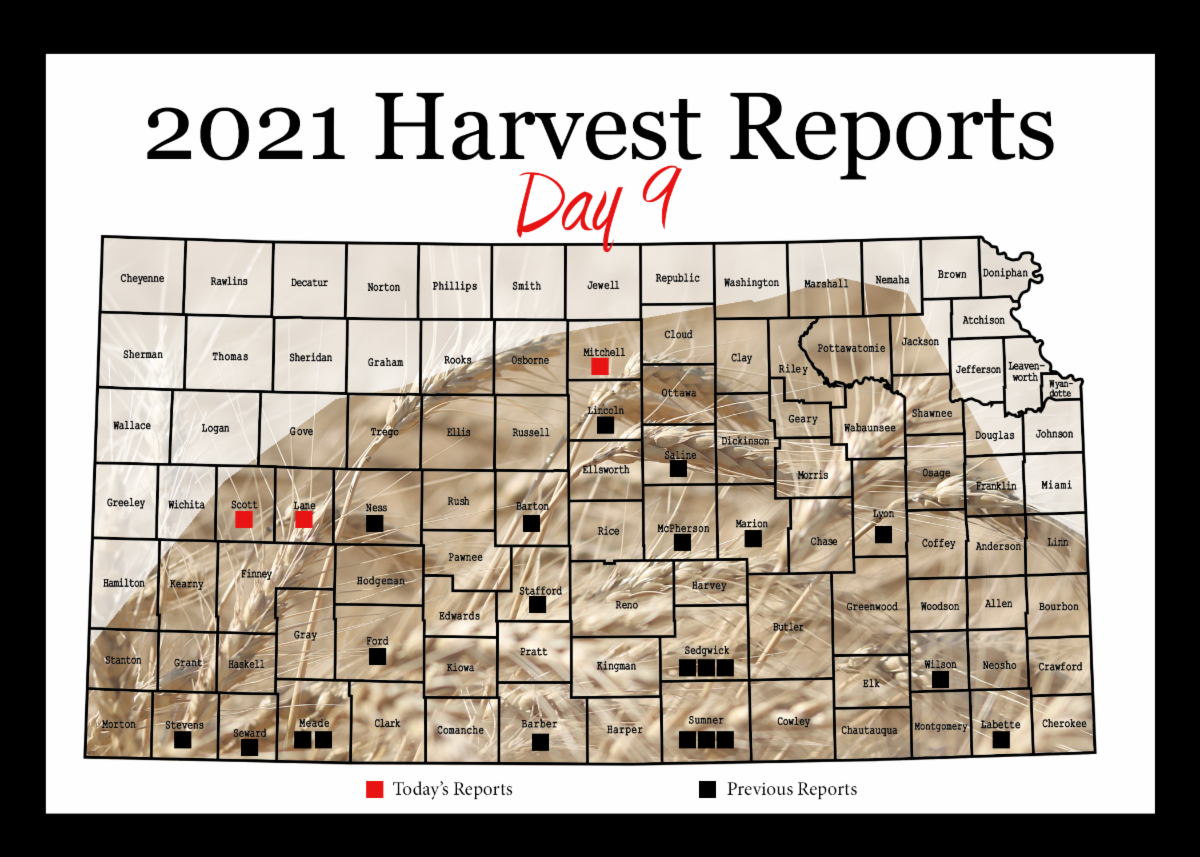