Sporadic sprinkles are keeping many Kansas wheat farmers on edge as they wait for moisture levels to decrease enough to get back into the combine.

Elevators are taking in loads, however, as farmers who can are continuing the slow, but productive, march of the 2021 Kansas wheat harvest.

Kris Allen, general manager of Randall Farmers Coop Union, said the wheat harvest weather has been a little frustrating with spotty, small showers that are keeping farmers in a get-up-and-go-then-get-shut-down pattern.

She expected farmers in Jewell County to be back in the fields Tuesday (June 29) late afternoon/early evening.

With fewer overall acres planted this year, wheat harvest started in the area on June 22, but with the weather delays, harvest is only about 20% complete thus far.

Test weights have stayed steady from 60 to 62 pounds per bushel, and protein is averaging from 10% to 11%.

Moisture is ranging from 11% to 12t, depending on if it rained the night before.

Overall, harvest in the area is a week to 10 days behind normal and won’t be wrapped up until July 15, unless the weather turns hot and dry.

Fields were ready to cut about four days before harvest really began, but there were not any cutters in the area.

Now that custom crews have arrived, harvest is progressing, but cooler temperatures in the 80s and scattered showers mean harvest is not progressing as quickly as other years.

Despite the delays, farmers needed the moisture for fall crops.

Although this week has been cool and damp, farmers have been cutting almost every day but are pushing moisture limits.

Elevator locations in Johnson and north are about 25% complete, Satanta/Moscow location about two-thirds complete, Greensburg about half complete, and Cunningham about 95% complete.

In comparison, the Lydia location just got going on Monday (June 28).

Yields are highly variable with some poor fields and some decent fields, depending on where rain was received.

Overturf said protein is all over the place — some areas below average and others above average.

Test weights are averaging about 60 pounds per bushel.

While this year is highly variable in terms of yield and protein content, with highs and lows, the final crop for the area will likely be right around average.

Michael Wisner, Vice President-Grain for Garden City Co-Op, Inc, agreed Monday’s rains were spotty, but noted farmers are cutting throughout their coverage area where they can.

Garden City Co-Op covers from Ulysses in the south to Shields in the north — roughly 100 miles north to south — and from Lakin in the west to Charleston in the east — roughly 60 miles east to west.

While harvest started on June 17, Wisner estimated harvest is progressing at roughly 70% of a normal pace and about halfway complete.

The recent sporadic rains have some farmers antsy to cut, which means some loads coming in with higher moisture content.

Overall, the moisture average is still pretty good in in the upper 11%.

In the southern range of their territory, Wisner reported a lack of moisture has meant yields are ranging in the 40s, but proteins around 12% due to the stress on the crop.

Around Garden City, yields are averaging around 60 bushels per acre.

Farther north in Dighton, yields are even higher, averaging in the mid-60s.

In these locations, protein levels are lower, but still are variable.

Overall, Wisner expected this year’s wheat harvest to be slightly above the five-year average and significantly better than last year’s drought-stricken crop that had lower acreage due to farmer crop rotations.

Mycotoxin testing has not shown any issues, and harvest is continuing even with the weather.

This year may just be a little longer harvest season than normal. 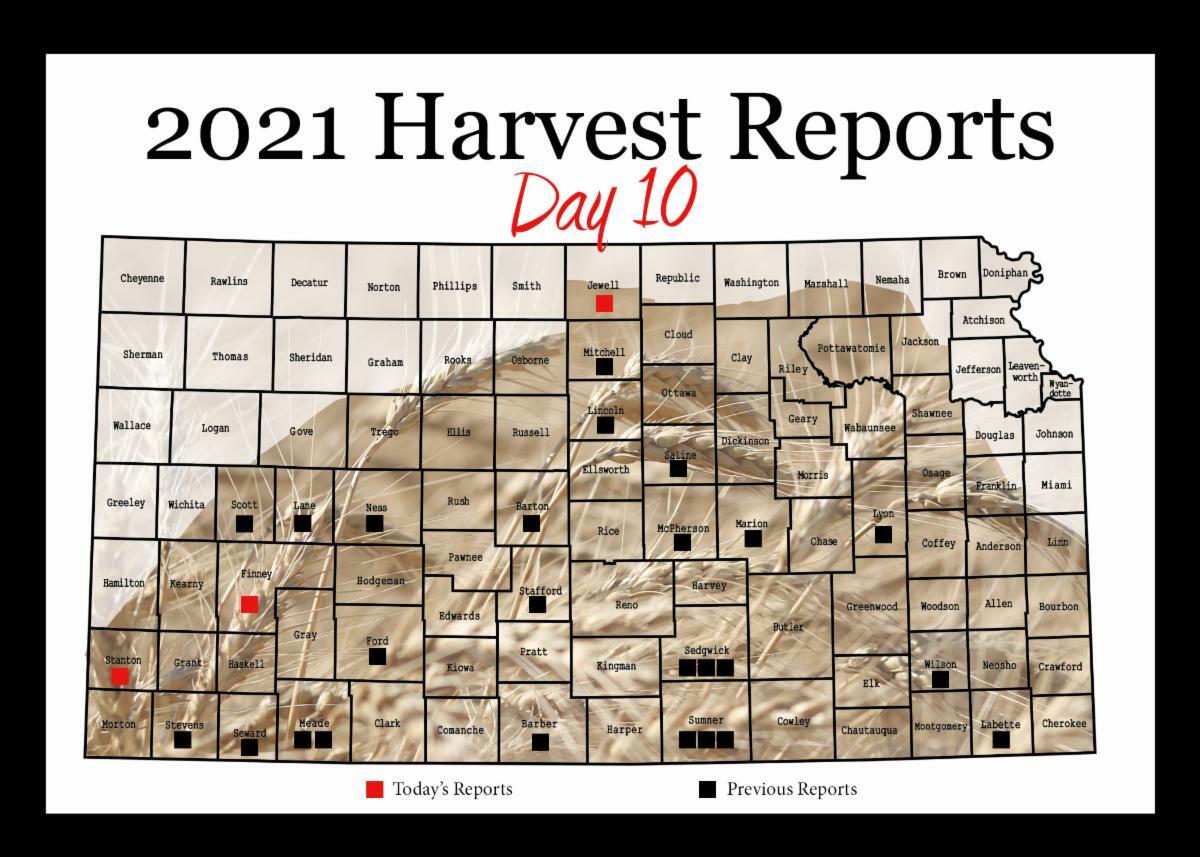