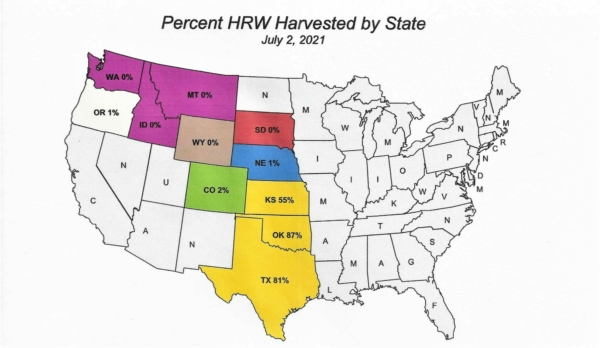 Most of the HRW harvest progress in the central and southern Great Plains this week was made in the first few days of the week as numerous and widespread rainstorms prevailed from midweek through the end of the week.

This contributed to muddy field conditions and high humidity which created afternoon rain events across the region, according to the Plains Grains, Inc. July 2 HRW Harvest Report.

Additionally, harvest did begin in the states of Colorado, Nebraska and Oregon this week, although all three states are reporting 2% or less of the crop harvested.

On a more positive note, there are now 146 samples in the lab reflecting the rapid progress harvest made when favorable conditions existed.

Those samples are in various stages of testing with kernel data being the most current.

Overall, average yields are still being reported to range generally between 40 bu/ac (2.69 tons/ha) to 60 bu/ac (4.0 tons/ha), with most test weights above 60 lbs./bu (78.9 kg/hl), although some areas are seeing reduced test weights because of the continuous rains.

The Texas HRW wheat crop is now 81% harvested, with remaining acres to be harvested in Texas being predominately in the northwestern part of the state extending to the Oklahoma state line.

Oklahoma, (is now 87% harvested) with remaining areas to be cut being in far northwest Oklahoma and the Panhandle.

Kansas, (now 55% complete with harvest) with most remaining acres to be cut located in northern half of Kansas.

Rain and its effect on quality continues to be a concern for the remaining acres to be harvested in all three states.

There are now 146 samples in the lab originating from Texas/Oklahoma/Kansas.

Subsamples are in route to a FGIS lab for grading.