Kansas farm families spent Independence Day weekend in the wheat fields, as warmer temperatures and dry winds allowed them to return to harvest.

However, not everyone had the opportunity, as a few scattered showers kept some areas too wet to cut.

Dean Stoskopf, who farms near Hoisington, usually aims to be done with wheat harvest by the Fourth of July, but harvest still has a couple more days to go — despite starting on June 21.

After a short break Sunday night to shoot off fireworks with the grandkids, the combines were back in full swing on Monday (July 5).

He expected to finish up harvest in two days — if everything holds together — just in time for the Barton County Fair to start.

Yields are ranging from 30 to 65 bushels per acre, with the average coming in the mid-40s.

Stoskopf reported stripe rust moved in late, so he decided not to spray.

But, he recognized he likely would have recovered some yield had he done so.

He did emphasize his operation purposefully selects varieties with good resistance to stripe rust and other diseases, so when the timing doesn’t work to spray, the crop still has genetic protection in place.

The harvest storms did cause some shattering and broke-over stalks due to high winds, but Stoskopf said the field he was cutting Monday afternoon was the best he has had thus far.

While this particular wheat patch followed a fallow period, the harvest’s high variability was evident as a neighboring field of continuous wheat was one of his worst.

Overall, while this harvest has been long, it is pretty typical for the area.

“For everything this wheat went through, this is what I expected for this year’s crop,” Stoskopf said.

“Not a great year, not a bad year, just an average crop.”

In Norton County, Chris Tanner reported that his harvest began on Friday (July 2), and, with fewer acres in the area, harvest will continue for about 10 days, if it doesn’t rain, but the forecast is calling for rain today (July 6).

Overall, the harvest is about a week later than normal; in the past, they were nearly wrapped up by Independence Day, but over the past several years, harvest has continued into July.

Tanner reported that yields are highly variable, in the mid-40s to mid-80s, but with the extremely dry conditions over the fall and winter, this is a lot better than he had expected.

Tanner said most of his wheat didn’t emerge until March because of the dry conditions, adding that they received no measurable precipitation between July 2020 and March 2021, except for a few small snow events over winter.

He applied 100 pounds of nitrogen in the spring, foliar-applied sulfur, and did a fungicide application, which, he said, “is why I’ve seen the big boost in protein — that and variety selection.”

So far he has been cutting WB Grainfield and will move into Bob Dole next. 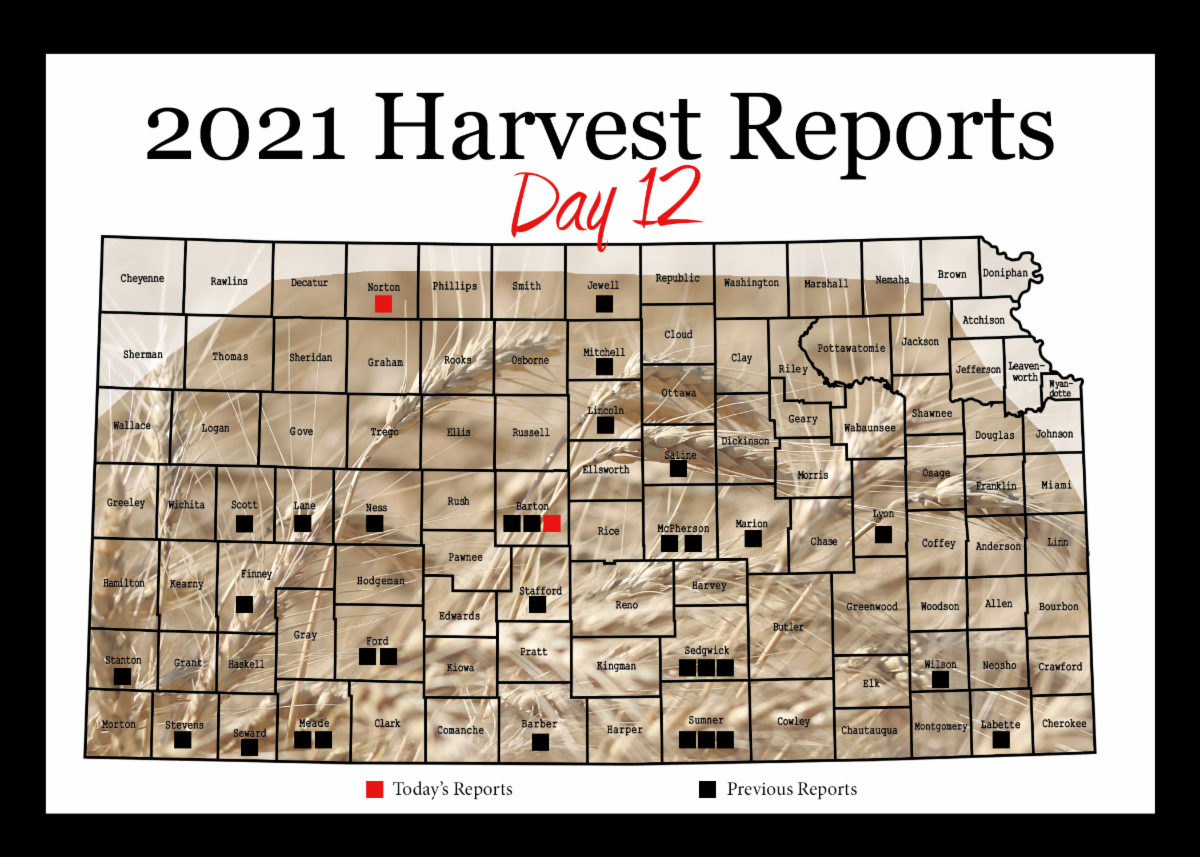