If you feel like the Kansas wheat harvest is lasting longer than normal, you’re not alone.

With a late start and continued delays from scattered rain showers, harvest is behind.

In the weekly Crop Progress and Condition report, USDA National Agricultural Statistics Service noted 62% of the Kansas wheat crop has been harvested as of July 4, behind 75% the year prior and 72% for the five-year average.

Despite the start-and-stop pace, however, the agency slightly increased the wheat crop’s condition ratings this past week to 65% good to excellent, 23% fair, and 12% poor to very poor.

Jeff Kimmell with Frontier Ag Inc. in Seguin reported harvest is yet again delayed in Sheridan County after it started raining hard on Tuesday afternoon (July 6).

Harvest only really kicked off in the area on July 3, with the Seguin and Menlo locations taking in only a few scattered loads the week before.

“It’s probably the latest start to harvest that I’ve ever seen,” Kimmel said.

Harvest is only beginning, but the results are highly variable.

Test weights were ranging from 52 to 60 pounds per bushel — before the most recent rains — and proteins are averaging from the low 10s to 13%.

A pattern of extremely wet then extremely hot weather — repeated — is likely the cause, along with spots of stripe rust.

With roughly 90% of the wheat left to cut in the area, Kimmell expects farmers to be in the combine for a while after fields dry out from Tuesday’s rain.

Farther east, Nathan Larson who farms in Riley and Clay counties, finished his last 10 acres of wheat harvest on Tuesday.

His crop is yielding up to 50 bushels per acre, which he considers an average crop.

“I’m not disappointed in my wheat at all,” he said.

He reported that the early heat took the top off the yields, but he saw no disease pressure, test weights were 60 pounds per bushel or better, and the protein was 13% at the location that was tested.

Larson’s harvest began on July 2, and he was able to cut through the holiday weekend.

Overall, he said harvest has gone pretty smooth and it turned out to be a “decent harvest.”

Jay Armstrong, who farms near Muscotah in Atchison County in far northeast Kansas, wrapped up his wheat harvest on July 5.

He started 10 days earlier but wasn’t able to get done sooner because of scattered rains.

He planted all soft red winter wheat this year.

His farm average was 84 bushels per acre, and he thought it would have been better if it weren’t for strong 70 mph winds and rain that came through during harvest.

The wind laid some of the wheat down, and it was hard to pick up with the combine.

“This is the best wheat crop I’ve had in my lifetime,” said Armstrong, attributing it to the intensive management program he implemented this year in addition to cooperative weather throughout the growing season.

“I put more money into this crop than I have before.”

He used nitrogen, sulfur, and fungicide to accomplish the impressive crop.

“We didn’t get all of our seed treated,” he said, “but, we saw a nine-bushel advantage with the seed treatment.” 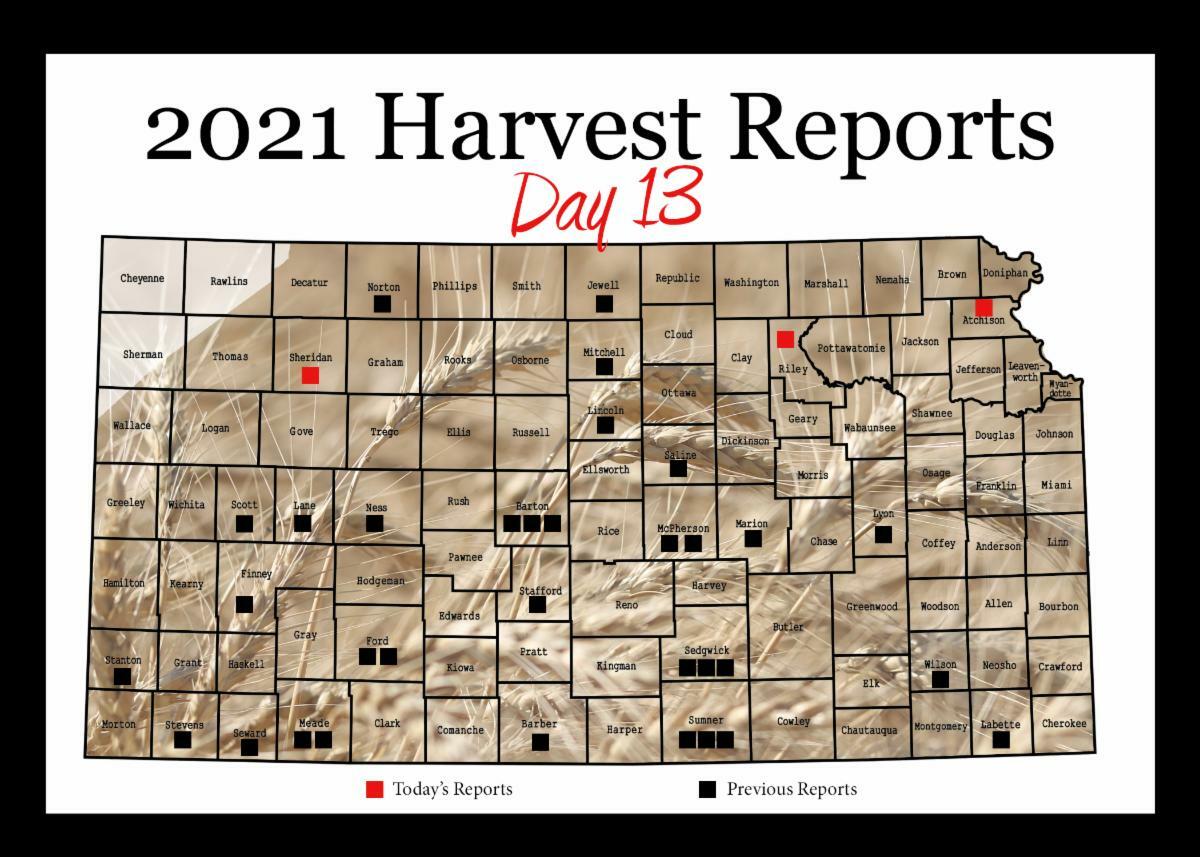