Harvest is on the downhill slide for much of Kansas, with just a few days left in northwest parts of the state.

Eric Sperber, general manager/CEO of Cornerstone Ag in Colby, reports that harvest is about 75% complete for the area, although there are some places to the south where cutting is only about halfway done.

Overall yields are averaging in the low 60s.

He noted wheat behind corn is averaging in the 40 bushel-per-acre range, a lot better than many had expected since the crop didn’t emerge until February or March with the extremely dry weather.

Sperber said area wheat is of decent quality, with protein averaging about 11.5% and ranging from below 10% to above 14%.

He reported having some test weight challenges with low test weights coming in throughout harvest, not just after rains.

He speculated this could be due to the “furnace blast” weather that came in mid-June or other environmental factors.

There was very little disease in the area overall, and many producers applied fungicide.

There haven’t been many reports of rust or wheat streak mosaic virus.

“We’re trying to compete for protein.”

He expected harvest to be wrapped up in five to six days, depending upon the weather.

Evan Lesser, who farms in Graham County, reported he hopes to have his harvest wrapped up by Thursday (July 15).

Harvest should have taken 10 days, but has taken him three weeks, due to scattered showers and high humidity.

Lesser’s yields are averaging in the upper 80 bushels per acre this year, which he said makes the long harvest worth the wait.

With the rains, he lost two pounds on test weight, but the crop is still about 60 pounds per bushel.

“This has been a really good harvest,” Lesser said, “other than Mother Nature not agreeing.”

He said SY Wolverine has been a very good variety this year, except that it was pretty hard to thresh.

He noted the 100-degree temperatures and head scab took the tops off the yields, but overall, fields that had a good stand last fall are doing really well, and wheat with poor fall stands is doing decent.

He reported that all varieties suffered from head scab, but not enough to cause concern.

Farmers will need to clean seed to get rid of it, and he expects a lot of seed will be treated this year.

“Everybody is about done,” Lesser said, reporting that the area is about 90% to 95% complete.

Lisa Schemm, who farms in Wallace and Logan Counties, reported her family wrapped up wheat harvest on Tuesday (July 13), after starting 12 days ago.

Their harvest dragged out about twice as long as normal due to scattered rains in the area.

She said their fields ranged from 40 to 70 bushels per acre, which is an average to slightly-above-average year.

Test weights were good, holding mostly around 60 pounds per bushel, and protein ranged from 11.4% to 15%.

Schemm said they had more frost damage than they thought, and some fields were hit with hail.

But there was no disease pressure or insect-damaged kernels this year.

They didn’t apply a fungicide because it was late when they noticed stripe rust coming in, so they are looking for more rust-resistant varieties for next year in case it is wet again.

While the Schemms wrapped up their harvest, Lisa said there’s still a lot of wheat out there in the area, estimating that it’s about 60% complete.

Harvest has been slowed down by rain, wet fields and mud in areas, and there are additional rounds of showers expected this week.

“We’re happy with harvest and thankful to be done,” she said.

“Good luck to everyone who is still cutting, and stay safe.” 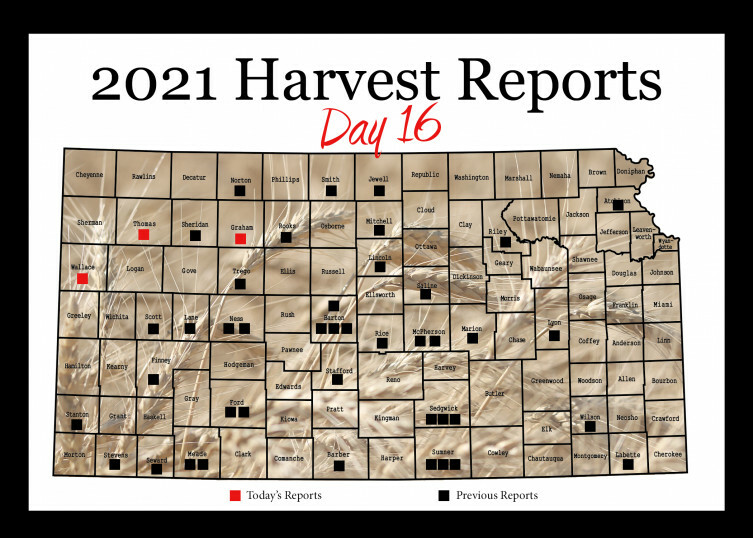