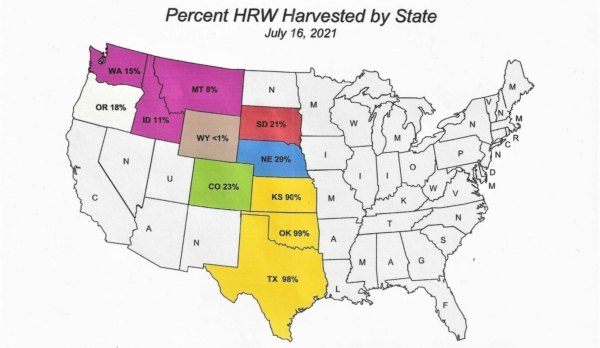 The 2021 US HRW harvest progress is reflective of the type of year it has been across all production regions.

Southern and central states started harvest some 10 days to two weeks behind normal starting dates in a process that was marked by extended periods of rainstorms and high humidity, according to the Plains Grains, Inc. July 16 HRW Harvest Report.

Harvest then progressed rapidly over two weeks as weather cooperated only to slow again toward completion due to high humidity and rain showers.

Most states across this region remain behind the normal percent complete with harvest for this date as compared to the historic five-year average.

By contrast, the northern United States and Pacific Northwest are significantly ahead of the historic five-year average for percent harvested on this date due to widespread drought conditions and record high temperatures during later stages of crop development.

There are now 266 samples in various stages of testing. Overall, average yields are still being reported to range generally between 40 bu/ac (2.69 tons/ha) to 60 bu/ac (4.0 tons/ha) in central and southern areas while tapering off moving farther west and north, where drought has been most pronounced.

Test weight is averaging 61.4 lb/bu (80.7 kg/hl), with higher reports in southern areas and lower reports emerging in drought areas and the more eastern areas where rain has slowed harvest.

Protein average increased significantly this week as samples from the western areas of Texas, Oklahoma, and Kansas are tested, now averaging 11.4% overall with average TKW now at 31.7g.

There are now 266 samples in the USDA lab originating from Texas/Oklahoma/Kansas/Colorado/Nebraska.