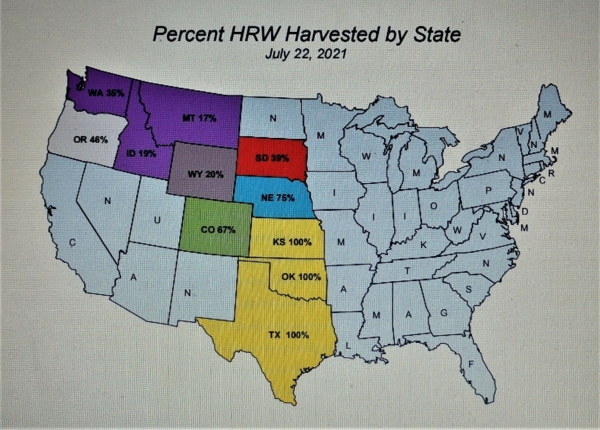 The 2021 US HRW harvest made significant progress this week with the three southern-most states of Texas, Oklahoma, and Kansas now complete.

According to the Plains Grains, Inc. July 23 HRW Harvest Report, Colorado and Nebraska accelerated harvest this week as well with both states over 65% complete.

South Dakota also made progress this week, but has reported much of the crop being baled for hay due the extreme drought.

The Montana crop is reported as being “highly variable” due to drought conditions.

This is evidenced by protein levels being reported over 13%, but are accompanied by lower test weights due to shriveled grain.

The Pacific Northwest continues to battle their own drought conditions and the resulting crop.

Oregon and Washington are experiencing depressed yield and abandonment of the crop in some cases in favor of saving any moisture received for fall planting.

Western production areas were not only affected by drought that ranged the full span of the production year, but also much of the area saw record-breaking low temperatures during the winter followed by late spring freezes.

Additionally, the wheat stem sawfly has affected many fields in northeast Colorado, western Nebraska, Wyoming, and parts of Montana.

There are now 345 samples in various stages of testing.

There was no change in protein this week (11.4%) which was boosted last week from western areas, other kernel factors were negatively affected including test weight (60.9 lb/bu) and TKW (30.8g down from (down from last week’s 31.7g).

Average Falling Number this week is 275 seconds (down 5 points from last week’s 280).