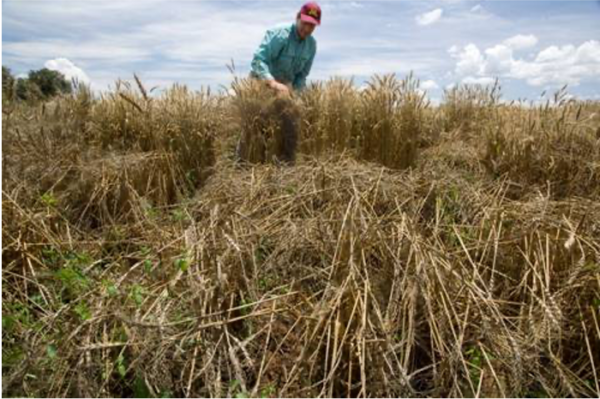 Image courtesy of University of Minnesota, and USDA ARS

A team of scientists has identified a promising resistance gene that could help fight a devastating fungus called stem rust, which attacks wheat crops and threatens global food security.

The discovery, recently published in Nature Plants, also identifies a gene in the fungus that triggers this resistance in the host plant, and together these discoveries provide a pathway to help wheat growers defend against this disease.

Stem rust, a virulent wheat disease (caused by the fungus Puccinia graminis) has become a major threat to wheat crops in Africa and other regions.

Breeders and farmers need access to more resistant germplasm (seeds) to protect wheat yields from losses due to disease epidemics, like the Ug99 strain which is attacking wheat crops in Africa and the Middle East.

Wheat provides roughly 20 percent of calories and protein for human nutrition worldwide and is the third largest crop grown in the United States.

Stem rust is among the world’s most devastating plant diseases, and can completely destroy a crop of wheat in a matter of weeks.

Dr. Peter Dodds, chief research scientist at CSIRO, said this was yet another weapon in the armory to stay one step ahead of wheat stem rust globally.

“Discovery of this resistance gene continues our effective collaboration with international partners that has already resulted in great advances to build resistance to this potentially devastating pathogen,” he said.

CSIRO and the Evanston, Illinois-based non-profit 2Blades Foundation, and is bolstered through a recent demonstration of a “gene stack” of five cloned Sr genes for effective stem rust resistance in wheat.

This new method will also ensure that the desirable trait (determined by multiple genes) will not segregate and be lost in subsequent breeding.

The most effective and environmentally sound way to defend against wheat rust diseases is through the deployment of such resistance genes in wheat varieties.

This is particularly important in developing countries where the fungicides used to combat rust disease may be expensive or unavailable. To learn more, visit 2Blades.org.