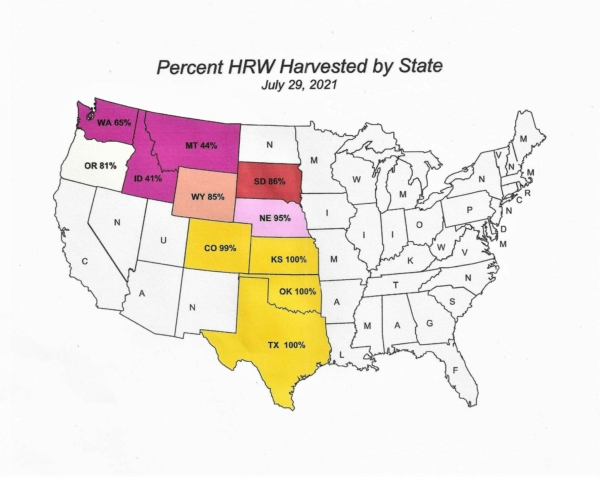 The 2021 HRW harvest continues to roll through areas of the central, northern, and northwestern United States with only four states remaining that have completed less than 85% harvest.

According to the Plains Grains, Inc. July 30 HRW Harvest Report,Colorado and Nebraska are over 95% complete with harvest in the central United States, and harvest is progressing quickly across the Northern states and Pacific Northwest.

Northern and northwestern states harvest have been significantly accelerated due to extreme drought and heat.

Farmers in several areas in that region continue to report abandoned acres and at this point hope for significant moisture needed to start planting the 2022 crop in a very few weeks.

There are now 411 samples in various stages of testing.

The averages below reflect composite numbers not weighted for production.

This week they also include samples from South Dakota and southward as well as the first three samples out of Montana.

Protein increased this week (11.6%) which was reflective of samples from more western and northern regions where moisture stress was a factor.

As was the case last week, other kernel factors were negatively affected by those same stress factors, including test weight (60.6 lb/bu, 79.7 kg/hl) and TKW (30.4g) down from last week’s 30.8g.

Average Falling Number this week changed only 1 second 276 seconds and represents 271 of the 411 samples now in the lab.

Work continues in the lab to determine the effect of the overall lower than expected falling numbers as well as the overall functionality of protein averages hovering in the mid 11% range.

The issue is exacerbated this year with the significantly reduced availability of a northern US HRW crop.