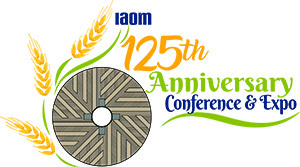 Attendance was more than 500, and there were 116 trade show exhibitors. Like past conferences, this year’s conference format offered attendees ample time to focus on the expo during the morning and then attend educational sessions in the afternoon.

Crown Bakeries, based in Nashville, TN, is a highly automated, high-speed baking company that bakes more than 10 million baked goods daily and employs more than 800 people.

IMEF Silent/Live Auctions. The International Milling Education Foundation (IMEF) Silent and Live Auctions were held during the conference and expo and raised nearly $60,000, which included winning bids and pledged donations from the industry. The IMEF is a philanthropic partner of IAOM that funds a variety of educational programs related to the grain milling industry.

These silent and live auctions held during IAOM’s evening banquet and awards ceremony are helping the IMEF edge ever closer to its goal of $3 million. (See page 10 for more details.)

Milling Operative of the Year

Because there wasn’t a conference in 2020, two Milling Operative of the Year awards were presented, sponsored by Milling & Baking News.

The 35th annual winner, for 2020, was Daisuke Ito, head of the overseas production group for Nisshin Flour Milling Inc., Tokyo, Japan, the parent company for Miller Milling Co. Ito, who joined Nisshin in 1998, served as director of engineering for Miller Milling from March 2017 until returning to Japan in May 2021. He is a 2004 graduate of the Swiss Milling School.

Freebern, who has been with the company since 2016 and a member of IAOM since 2006, has helped PHM Brands grow from one flour mill in Texas to seven grain processing and storage facilities in the Midwest.

Jeff Gwirtz, Ph.D., president, JAG Services, Lawrence, KS, was awarded IAOM’s highest and most prestigious award in recognition for his exemplary service to the milling industry and IAOM.

Gwirtz, who is a 38-year member of IAOM, has served as chairman of the IAOM technical committee and assisted in updating the association’s correspondence course.

Richardson, who has been an IAOM member since 2010, has helped develop and grow IAOM’s Latin American district.

Garvert has been an active member of IAOM since 1990. He served as a member of the Flour City District’s executive committee from 1998-2003, and on the IAOM international board, representing the Texoma District from 2007-2013.

In that position, Galle will be responsible for overseeing preparations for the association’s 2022 conference in Richmond, VA, and will serve as president of the IMEF.

Galle also is in line to serve as the association’s president in 2022-23.

As treasurer, Matson will work with Garvert overseeing preparations for the association’s 2022 and 2023 conferences. Matson also will serve as vice president of the IMEF.

Six companies participated in the Product Showcase at the expo, which included:

• Innovative Moisture Management System, Swisca. Swisca was voted Best of Show based on those who attended all of the Product Showcase presentations.