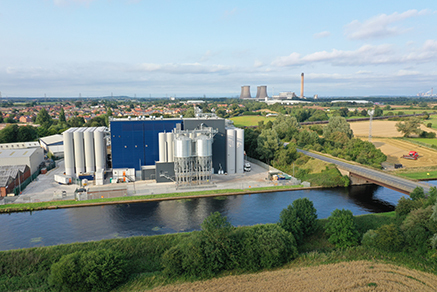 When the people at Whitworth Bros. Ltd., the largest flour milling company in the United Kingdom (UK), talk about building and operating a “SmartMill,” they’re talking about a journey with Uzwil, Switzerland-based Bühler to create a fully-digital flour mill tailored to the customer’s needs. This mill takes information from thousands of data points and, eventually, self-adjusts the milling process without human intervention.

Whitworth’s new Mill E3 began production in April 2021 at Whitley Bridge, Yorkshire in the north of England. The “E3” stands for three efficiency levels in terms of space, installation time, and energy reduction.

While Mill E3 isn’t the end goal of the SmartMill, it’s a big step in that direction, says Whitworth Managing Director Mike Peters, who has been in the flour milling industry for nearly 40 years. He joined Whitworth Bros. in 2004 and was named managing director in 2016.

The great thing with the E3, even if we leave the SmartMill out of it, from startup, the mill hit its production targets really, really quickly. -Mike Peters, Whitworth Bros. Ltd.

“For us, the Mill E3 is helping us optimize and manage our flour milling processes from a quality control and efficiency capability,” Peters told Milling Journal in a phone interview from the UK early in October. “What we’re trying to do is optimize our process capability as tightly as we can to ensure very high consistent production.”

The mill does this using data gathered at 15,000 collection points from beginning to end of the production process. The miller uses this data to set up milling parameters ahead of time, and eventually, through the learning capabilities of artificial intelligence, the mill will be able to set such parameters as product volume and roll gaps on its own.

“The great thing with the E3, even if we leave the SmartMill out of it, from startup, the mill hit its production targets really, really quickly,” Peters said.

Whitworths Holdings Ltd. Milling Group is the largest flour producer in the UK, with an annual output of about 1.4 million metric tons.

“We keep away from the niche gluten-free and organic markets,” Peters said. “That doesn’t really fit our business model. But other than that, we produce white flours, biscuit flours, cake, heat-treated flours, chapati flours, and whole meal flours. We have a whole raft of products that we can supply.”

Peters said that Whitworth is a very proud family business. The principle shareholder is Martin George, whose son Michael is also on the board.

Martin’s grandfather bought Whitworth in Wellingborough in the late 1920’s from the Whitworth brothers, who first opened a mill on the Wellingborough site in 1886. Later, he also bought another milling site in Peterborough, Cadge, and Coleman.

“We were a small miller initially,” said Peters. “Then in the 1990’s, the family decided to invest in new technology and, working with Bühler, built its first new milling unit at Wellingborough, Northhamptonshire. The mill building was big enough to install a second mill with Bühler again. The business continued to grow, and in 2006 and 2009, we built two more mills with Bühler at our Peterborough site. In 2012, we also brought online another flour mill at our Wellingborough site, again working with Bühler.

“Each time we built a mill,” he said, “we looked at the construction of the building and what new techniques and capabilities were there that suited us, but also we looked at what technology and process Bühler was working on that we could adopt.

“I think it’s fair to say we were the first miller to start working with Bühler debranning technology. As history bore us forward, we’ve been very privileged to work with a lot of Bühler equipment before it ever came out on the marketplace.

“As well as growing organically in 2012,” he added, “we acquired the assets of Smiths Flour mills. In 2016, we acquired two heat treatment plants from Jas Bowmans when they decided to leave the milling market.

“2016 also saw us acquire Carrs flour Mills Limited, and in September 2018, we acquired two sites from Rank Hovis when the former giant of UK flour milling decided to manufacture for its own bakeries.”

“Back in 2018,” Peters continued, “we had a serious conversation with Bühler about the Mill E3. They presented the idea about a new way of construction and a new technology, the SmartMill. We had no hesitation of embracing it and getting on with it.

“Bühler is excellent at building flour mills, and we are pretty good at running them,” Peters said. “Running and maintaining a mill is very different from building one. This is where we can share our expertise with Bühler as to how the mill performs during commercial production.”

Roman Sonderegger, head of the Wheat & Rye business unit at Bühler, said the E3 is serving as a real-time laboratory for field testing digital processes as they are implemented at Whitworth Bros.

“This is a very significant project for Bühler that allows us, for the first time, to gather so much new data on the milling process while also giving us the opportunity to collaborate with Whitworth Bros. as we work closer toward the creation of the SmartMill.

“This is also momentous in working toward our corporate target of cutting energy, water, and food waste by 50% in our customer value chains by 2025.”

Whitworth Bros. selected the site for E3 at Whitley Bridge, where the company already was operating two heat treatment plants.

“In the United States, you build a lot of concrete mills,” Peters noted. “We don’t. We tend to build using a steel framework, then enclose the building using a sheeting system and lay concrete floors. We can put up these buildings pretty quickly.”

This is a very significant project for Bühler that allows us, for the first time, to gather so much new data on the milling process while also giving us the opportunity to collaborate with Whitworth Bros. as we work closer toward the creation of the SmartMill. -Roman Sonderegger, Bühler

He estimates that from start to finish, building construction and equipment installation at Whitley Bridge took approximately 16 months. Installation of the actual mill was much faster through the use of modular packages of equipment shipped completed and factory-tested direct from Switzerland to the UK.

This modular approach to mill manufacturing and assembly turned out to be critical in getting E3 built under current circumstances, and it allowed for a fast installation despite obstacles, such as the COVID-19 pandemic.

“In terms of installation time, the Arrius grinding system needs only three connections,” Peters noted. “You can bring it in on a trolley and just place it down.”

During an online podcast from Bühler headquarters on Sept. 23, participants estimated that this modularity saved 11,700 hours of labor to install as compared to a conventional mill, or roughly six man-year of labor.

Andrew Thomson, technical miller at Whitworth, gave an example in a video presented during the podcast: “The blower module installation was the fastest I’ve ever seen in my career. It came fully constructed and tested, and it was just plug and play.”

With regard to the airlock table: “Thanks to the reduction of more than 100 parts to a handful of parts, the airlock module was installed in record time.”

In addition, the modular approach allowed Whitworth Bros. to save about 20% in the footprint of the expanded building at Whitley Bridge. (Total floor space in the building is 55,000 square meters, or roughly 150,000 square feet.)

In fact, the E3 is a combination of a variety of Bühler-developed technologies, some a few years old and some brand new.

The Whitley Bridge mill’s cleaning system, where the bulk of the wheat cleaning takes place, includes the following Bühler machines:

• The MTCH combistoner, which is a key module of the Vitaris cleaning system, separates materials such as stone and glass and then separates the product stream into light- and high-density fractions.

When the two streams recombine downstream, they are ready for tempering.

The use of air recycling and a frequency converter reduces energy consumption by up to 15%, depending on the configuration of the combicleaner.

The heart of the Mill E3 is the relatively new Arrius grinding system on the roller mill floor. In fact, Bühler prefers to call the Arrius a “fully integrated grinding system.” Whitworth Bros. keeps the number of rollstands on the floor confidential but does say there is a combination of single-high and double-high units. Among the Arrius’ features:

• An integrated drive reduces installation time and saves an estimated 10% on energy consumption – wheat grinding typically is the most energy-intensive operation in a flour mill.

We are currently working with Bühler to ensure that all the data we are observing on the blockchain system aligns with our laboratory data, before we go live with blockchain with our clients in the future. -Andrew Thomson, Whitworth Bros. Ltd.

• The electrical switch cabinet and web server also are integrated into the unit.

• A patented feeding module self-adjusts to fluctuations in the product stream and provides even feeding across the length of the roller pack. The roller pack can be used to increase starch damage as needed.

• Multiple sensors monitor and regulate the grinding process, a big step toward the SmartMill. These can monitor and self-adjust roll gap.

• The integrated web server allows monitoring and operation of the grinding system from a variety of devices, including smartphones, tablets, and personal computers.

• The unit’s transmission is decoupled from the roller pack, making it easier to adjust roll gap and maintain the adjustment.

The Mill E3’s 15,000 data points feed data every few seconds to the Bühler Mercury Manufacturing Execution System (MES), which facilitates control of every aspect of the mill’s internal workings.

Data also is sent to the Bühler Insights platform, which uses mathematical algorithms to compare past and present production and process parameters. This body of data will be crucial in developing new algorithms for operation of the SmartMill in the future.

“What is most exciting about this technology is that it provides the operator with data in real time, enabling the miller to make key, well-informed decisions about the plant,” Peters said. “Once that is defined accurately, you can then be more exact in the way you set up your mill process and further push process capabilities.”

Other digital service modules include:

A next step toward the SmartMill will include taking data from the Bühler Mercury MES and Bühler Insights and making it available to Whitworth clients through blockchain technology.

Still in development, the idea is to provide secure transmission of data to customers providing transparency around the exact process parameters being used in milling their flour. One potential outcome could be less frequent product sampling and laboratory testing. Blockchain can provide both data security and transparency.

“We are currently working with Bühler to ensure that all the data we are observing on the blockchain system aligns with our laboratory data, before we go live with blockchain with our clients in the future,” Thomson said.

The Next Step in Automation