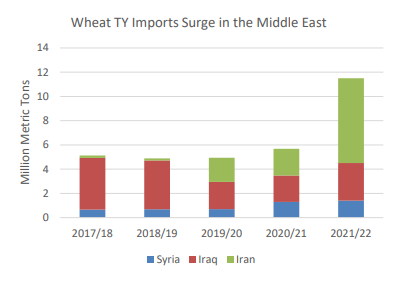 In a market-moving report in February, the U.S. Department of Agriculture (USDA) cut its 2021/22 global wheat production estimate by more than 2 million metric tons (MMT) from its January estimate.

What is behind this change so late in the marketing year?

However, coming into better focus is the hard-hitting drought in Middle Eastern countries that usually grow more wheat for domestic use.

That suggests higher wheat import volumes will be needed to meet domestic demand.

Much of the production shortfall is being made up by imports from Russia, which enjoys a transportation advantage, FAS reported.

A look into the situation in these countries is helpful.

In October 2021, Reuters reported that Iran, which has imported around 1.0 MMT of wheat annually over the last five years, would need to import 8 MMT in 2021/22 to ensure a steady bread supply.

The Foreign Agricultural Service forecast wheat imports at 7 MMT this year, up nearly 5 MMT compared to other years.

Iran suffered its worst drought in half a century during the 2021 growing season, cutting the wheat crop by 30%, said industry sources.

In Syria, the “Year of Wheat” campaign has been challenged by low rainfall, leaving an import gap of 1.5 MMT.

The United Nations (UN) Food and Agriculture Organization (FAO) said that Syria would need to import at least 1.5 MMT of wheat.

The organization said the government’s target of 1.2 MMT of local wheat, purchased through forced sales of wheat from Syrian farmers to the government, “looked unrealistic.”

The Grain Board said in December it plans to import 2 MMT of wheat in 2022.

Unlike the other countries discussed here, Iraq is less price-sensitive and buys high-quality wheat from U.S., Australian and Canadian origins.

When Iraq’s ministry of trade was actively tendering for wheat between 2017 and 2019, more than half its imports came from the United States.

This month, the USDA/FAS agricultural attaché in Turkey reduced the estimate for wheat imports in 2021/22 by 5 MMT to 10.8 MMT.

Even so, the revised estimate is 33% higher than imports from previous marketing years.

The attaché’s report is lower than the recent WASDE report, which put Turkey’s wheat imports at 11 MMT.

The Turkish Statistic Institute showed that wheat imports during the first six months of the 2021/22 trade year (June-November 2021) grew by 20% year-on-year.

Egypt is the largest importer of wheat in the world.

It produces less than half the wheat it consumes annually.

According to the Egyptian Supply Minister, the government is working hard to diversify its suppliers.

The recent tension between Russia and Ukraine could disrupt 80% of Egypt’s grain flow.

Egypt’s imports are expected to increase 7% compared to the five-year average.

Global wheat production challenges fueled by drought have certainly driven this market in the past.

And this month, USDA summarized its report this way: “The global wheat outlook for 2021/22 is for lower supplies, higher consumption, increased trade, and reduced ending stocks.”

The price incentive for farmers to produce more wheat for 2022/23 is real.

The world will be watching to see if Mother Nature supports that effort.

For the full article and related graphics, click here.