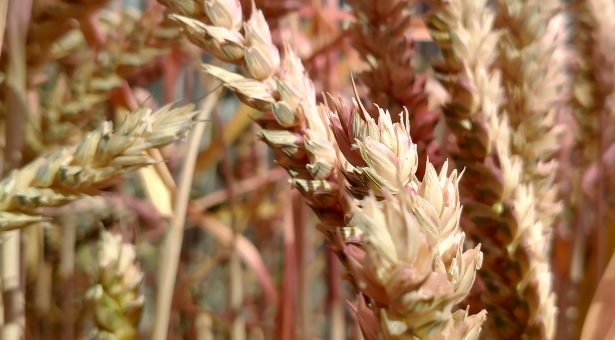 Norwich, UK (June 16, 2022) - New molecules, bacteria, and other organisms are often named after their constituent parts or sometimes after the institute or people that discover them.

But research scientist Dr. Guy Polturak took a slightly different approach when he and colleagues discovered a previously unknown molecule in wheat. In a reworking of convention Polturak has named the novel molecule Ellarinacin, after his two young children.

Ella, and her older brother Ari, are now forever associated with this interesting molecule which belongs to a class of molecules called triterpenes.

Polturak, a Postdoctoral scientist at the John Innes Centre explains, “Novel molecules are often named after the institute or plant species in which they were discovered, so it’s a great honor for me to be able to do this. My children are avid wheat fans, particularly Weetabix, so I thought naming a wheat molecule after them would be appropriate.

“When I told them, I started by explaining what a molecule is and I lost them there a bit. My son who is a bit older was quite excited, but my daughter could not care less! But they will always have this…these things last longer than I will.”

The discovery of Ellarinacin is part of the groundbreaking science in the Osbourn research group.

Previously they have revealed that genes encoding a range of exotic and potentially useful plant chemistry appear to cluster on the genome like beads on a string.

These biosynthetic gene clusters have been identified in other cereal crops, including in rice and oats. But until recently no such gene clusters were known in wheat, one of the world’s most important cereal crops from which 20% of human calories are derived.

In the recent study, (Pathogen-induced Biosynthetic Pathways Encode Defence-Related Molecules in Bread Wheat) the Osbourn and Uauy research groups collaborated to use data to show that six biosynthetic gene clusters are switched on when the plant is attacked by disease-causing microbes.

Using a technique called transient expression – which allows researchers to rapidly assess different combinations of the genes – they showed that the clusters encode a diverse set of molecules including triterpenes, diterpenes and flavonoids, some of which may have potential uses in crop protection.

So why does the plant produce Ellarinacin and the other molecules discovered in this study?

“We can assume these molecules increase tolerance to a broad-spectrum of plant pathogens, because such chemicals tend not to be pathogen-specific,” explains Polturak. “The big challenge now is to understand what these different molecules do and how each pathway contributes to the defence response in wheat. Any new molecules that have a certain bioactivity could also serve as potential leads for the development of new disease control solutions.

“If you discover genes involved in production of these wheat defense compounds, you could potentially use this knowledge in wheat breeding – for example breeding varieties which would produce higher amounts of these defence molecules, or in a wider range of conditions.”

Since the paper was written and published, the research in the Osbourn group has continued to identify and characterize gene clusters and their products in wheat.

Pathogen-induced Biosynthetic Pathways Encode Defence-Related Molecules in Bread Wheat is in PNAS (Proceedings of the National Academy of Sciences).